Baroque 2000 was founded back in 1998. This endeavour was the result of a rich and prolific repertoire being very seldom performed in Durban. Only a few of the innumerable works of this period were known to the public amongst which mainly the “Four Seasons” by Vivaldi, and the “Messiah” by Handel. Since then, Baroque 2000 has offered, to a broad and faithful audience, regular concerts with a repertoire exceeding 300 works.

Baroque 2000, since its foundation, has been a very active “platform” for young and uprising musicians, singers and soloists who were given the chance to perform their art with a professional ensemble.

Baroque 2000 has been the invited guest of various Music Festivals in the country: The National Arts Festival in Grahamstowm (3x), the Hilton Festival, The MIMS Festival hosted by the Drakensberg Boys’ Choir (4x), the Maria Ratschlitz Festival. The ensemble has also joined with some of the leading SA choirs: the Drakensberg Boys’ Choir, the Ars Nova Consort, the Durban Chamber Choir, the SA Singers etc. Baroque 2000 has found a very fruitful partnership with OSCA, the University of KwaZulu-Natal Opera School lead by Dr. David Smith. 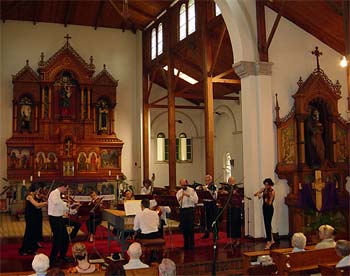 Although usually performing without a conductor, Baroque 2000 has also been placed under the baton of prominent International Conductors: Sidney Harth (USA), James Landor (UK), Andrey Boreyko (Russia), Arjan Tien (NL), Leslie Dunner (USA) and most recently with François Xavier Roth, one of the London Symphony Orchestra Invited Guest Conductors. The ensemble was also lead at several occasions by Chiara Banchini, the Leader of the World famous “Ensemble 415”. Darragh Morgan (violin – Ireland) was the Director of Baroque 2000 over the 2004 Season.

The ensemble is now planning (besides its traditional yearly Concert Series of 8 concerts in 2006) a production of a work by André Campra – Musician of the Court of Louis XIV – the “Europe Galante”. This show will be choreographed by the now World famous Boyzie Cekwane and led by Chiara Banchini (Musical Director), to be produced at the next National Arts Festival in Grahamstown in 2006. This will be the interesting meeting point of original music of the 18th century with contemporary African dance!

Baroque 2000 is proud to be engaging into the extremely challenging project of GROW 2010™.

Simon Milliken – Double Bass
Studied at Exeter University, the Royal Academy of Music and qualified as a teacher,. Specialising in instrumental teaching at Middlesex Polytechnic. Played and taught in London before joining the KZNPO in 1985, becoming Principal Double Bass in 1992.

Mduduzi Xulu – Viola
Grew up in Johannesburg. Member of the KZNPO for 4 years. Teaching experience with the African Youth Ensemble.

Fiona Grayer – Cello
B. Mus – University of Cape Town. Member of the KZNPO for 1½ years. 5 years teching experience in Cape Town at various project for previously disadvantaged children and is very involved in the KZNPO project in Inanda.

Tzanko Tzankov – French Horn
Masters Degree from Bulgaria and has played in professional orchestras since 1987, including Sofia Philharmonic Orchestra and KZNPO since 1996. Teaching French horn at the Durban Music School.